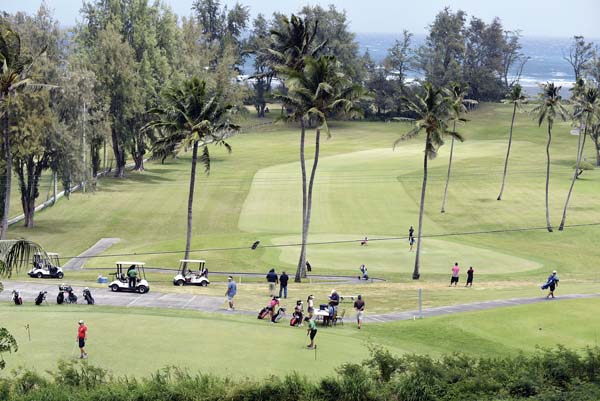 The Maui County Council Parks, Recreation, Energy and Legal Affairs Committee on Tuesday began looking at ways to increase revenue and decrease costs at the Waiehu Municipal Golf Course, which Mayor Alan Arakawa put on the chopping block earlier this year due to operational losses.

WAILUKU — Installing new grass, reviewing high administrative costs and assessing employee duties at the Waiehu Municipal Golf Course are some of the areas a Maui County Council committee will explore to help the island’s only public course increase revenue and decrease financial losses.

This past spring, Mayor Alan Arakawa proposed closing the Waiehu golf course, citing losses of nearly $3 million a year and $16.3 million over the past decade. But, after listening to members of the public and golfers, the Maui County Council decided to keep the course alive while looking at ways to improve the finances of the course itself.

On Tuesday, the council’s Parks, Recreation, Energy and Legal Affairs Committee heard in Council Chambers how municipal courses are operated on Oahu and Kauai.

“It was a good baseline start to see what’s going on,” said Committee Chairman Don Guzman of the panel’s first meeting to address golf course improvements.

After the daylong meeting, Guzman said committee members would re-examine the matter in future meetings, and he would work with Waiehu Golf Course Superintendent Todd Allen on a plan for the golf course, which Kauai and Oahu officials called a “gem.” They also applauded Allen’s efforts to rid the course of weeds and make other improvements.

The Oahu and Kauai golf course officials advised Maui parks officials to temporarily close down nine holes of the 18-hole course to pull out its bermuda grass and replace it with the highly tolerant seashore paspalum turfgrass.

Garrick Iwamuro, golf course system administrator at the City and County of Honolulu’s Department of Enterprise Services, said that Allen is “heading in the right direction” at Waiehu by installing the paspalum grass, which would withstand the oceanside area’s salt air.

He also added that “I think the solid choice would to be close nine holes” to install the grass without interruption and then re-open them and shut down the other nine holes for turf replacement.

Rich Rapozo, superintendent of the Wailua Municipal Golf Course on Kauai, said that by looking at the number and types of weeds at the Waiehu Golf Course, he “would definitely close down nine holes” to eradicate the weeds and then install the new turf.

“It’s about sacrificing to where you guys want to be. It doesn’t happen overnight,” Rapozo said.

He noted the work on the course should have been done years ago and pointed to officials from Maui visiting his Wailua course a while back to get tips on improving the Maui course. (Allen was not the superintendent at the time.)

During the meeting, Allen agreed with the recommendation to temporarily shut down nine holes, if it were decided to install the new grass — a process that would take about 90 days. He said there are other options as well to install the new turf without shutting down the nine holes.

After the meeting, Guzman said there was talk in the committee of perhaps growing sod for the course to shave off the time needed to install the new turf.

Guzman also said that he and the committee would look into the administrative costs for the Waiehu course. Those costs rose from $214,000 in 2014 to around $1.2 million last year.

The costs include those from 12 county departments that provide services to the course, such as purchasing, accounting and personnel services, a report showed.

Ian Costa, deputy director of Kauai’s Department of Parks and Recreation, said he also has an issue with the administrative fee, noting: “I always grumble about that.”

He said the administrative fee amounted to the county paying itself for using itself.

Costa said no other park pays the county of its use of other county services.

Guzman said he would like to examine the number of employees the Waiehu Golf Course has because he heard from Oahu officials that there are around 22 employees at most of the courses, but some of the employees also do golf cart services.

At Waiehu, there are 19 full-time employees, which is in addition to a private entity that handles the golf cart services.

Other areas Guzman and the committee would examine include establishing an online system for the golf course and a way to market the course to visitors to help subsidize use by residents.