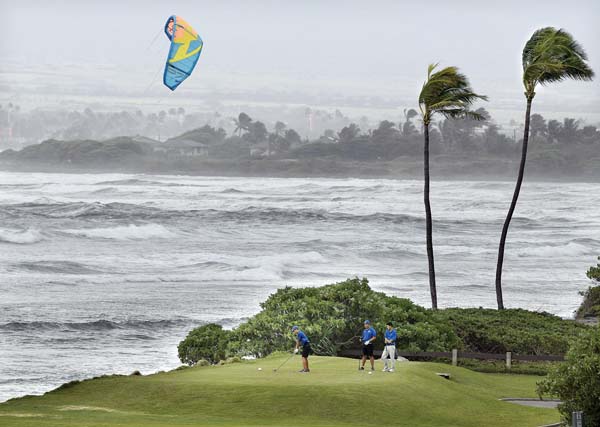 Seabury Hall’s Hudson Jackson tees off on Waiehu Golf Course’s 6th hole as teammate Ryan Chang and Maui High’s Jordan Terada look on Wednesday afternoon during a windy Maui Interscholastic League match. The back nine holes of the county course are scheduled to close April 16 for three months to make room for renovations to its greens. The Maui News / Matt Thayer photos

The back nine holes of the Waiehu Municipal Golf Course are scheduled to close April 16 for three months to allow its greens to be dug up and be replanted with saltwater-tolerant grass.

It’s the first time the greens have been upgraded in at least 30 years, county Department of Parks and Recreation officials said Thursday. Work on the front nine greens would follow, pending approval from the Maui County Council, said Parks Director Ka’ala Buenconsejo.

“We’re basically replacing the entire green system to be brand new,” he said. “It’ll be pretty awesome and probably one of the best greens on the island.”

The department plans to take out the 88-year-old course’s original Bermuda grass and replace it with highly tolerant seashore paspalum turfgrass. The grass is popular at oceanside golf courses for its ability to withstand salt air and minimize weeds.

“It’s going to be more cost-efficient,” Buenconsejo said. “We hope to bring new, big tournaments and our goal is to be the best municipal course in the state, if not the nation.” 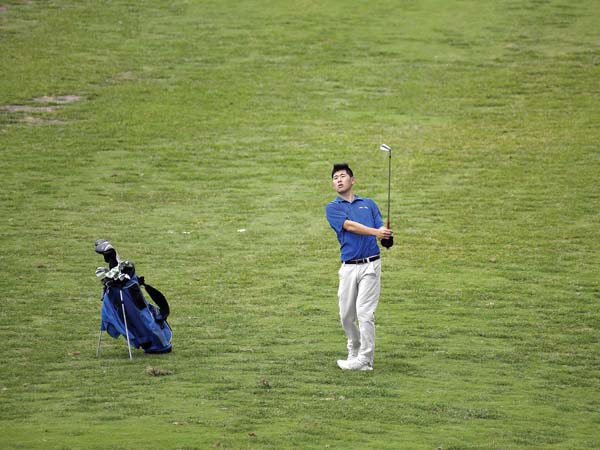 Maui High’s Jordan Terada hits his approach shot on Waiehu Golf Course’s 6th hole Wednesday afternoon during a Maui Interscholastic League match with Seabury Hall. The back nine holes of the county course are scheduled to close April 16 for three months to make way for greens with saltwater-tolerant grass.

While Maui’s golf community unanimously agreed the greens needed to be redone, there appeared to be division over the temporary closure plan that would leave the course with just nine holes for at least half a year.

Art Rego, who runs the pro shop, golf carts and driving range, said he believes he will lose 65 to 70 percent of his player customers during the renovations. Revenue has stagnated over the past couple years with about a third of the players walking and not renting golf carts, he said.

He noted that nine holes can only hold 72 players at a time.

“Not too many guys want to play the same nine holes two times a week,”Rego said. “I’m going to go along with it for now to see what happens.” 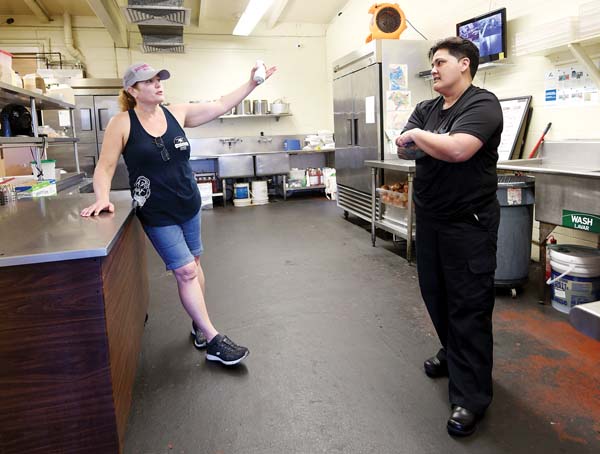 Fatt Chicks Burgers owners Tootsie (left) and Bonny Davis describe the challenges of moving out of their space at the Waiehu Municipal Golf Course clubhouse on short notice Wednesday.

“Personally, I think it’s really going to hurt the golf course by closing,”Ishikawa said. “The pro shop, he’s going to be hurting. His livelihood is renting the carts out.”

Ishikawa said he believed the golf course should have followed a report by the U.S. Golf Association about 15 years ago, which advised the county to plug the greens with the paspalum turfgrass over time and allow it to naturally replace the Bermuda grass. He said the process would have taken two to three years never require the course to close.

“The closure is going to really slow play down, and it might frustrate people to where they don’t want to play,” he said. “When it’s done, hopefully it’s really nice, and the golfers come back. But you never know, some people give up and never grab their clubs again.”

Buenconsejo said the department is anticipating loss in revenue and golfers during the temporary closure, but he said he believes it was the best option after meeting with officials at other courses across the state. He added that the county Finance Department is working with Rego to adjust the rent on his lease during the renovations.

“Once we’re done, we hope to turn it around, and I think the community will see the value of the changes,” he said. 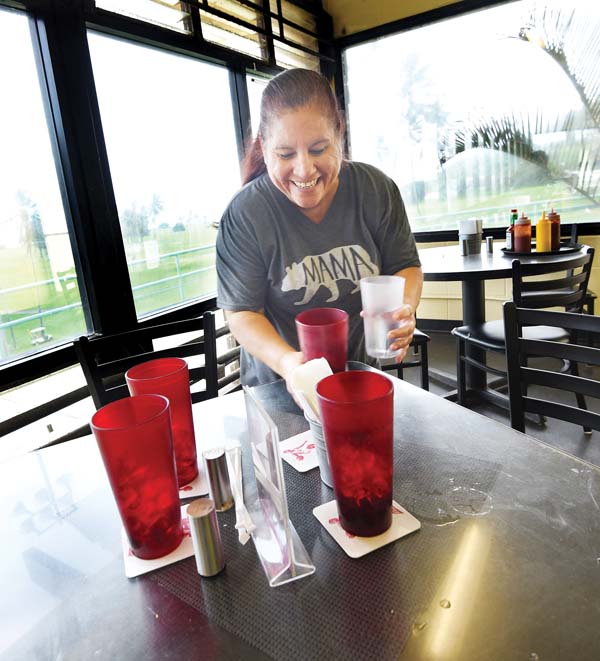 Fatt Chicks Burgers employee Leona Figueira clears a table Wednesday. She said she would be continuing on with the business owners’ food truck.

Ralph Miyamoto, the Maui director of the Hawaii State Golf Association, supported the renovation and changes led by the golf course’s superintendent, Todd Allen. Miyamoto said Allen has wanted to upgrade the greens for the past five years, which would have saved the county around a quarter-million dollars — but was met with resistance from older players.

Miyamoto noted that the temporary closure will not affect the Maui Interscholastic League golf season and will have minimal impact on junior golf tournaments.

“Todd himself is willing to do more to enhance the course, not only in playability but in beautification,” Miyamoto said. “That’s a big plus for avid golfers. Hats off to Todd for his vision and perseverance.”

While half the municipal course gets ready to close, its restaurant, Fatt Chicks Burgers, also plans to close Sunday after four years. The owner cited financial challenges, a lack of maintenance and issues with the county over terminating its lease that ends in 2019.

The owner said the concessions area would remain open for a few days after Sunday to sell its remaining food.

“There’s been so many challenges over the years that financially it’s taken a toll on us,” said Tootsie Davis, who runs the restaurant with her wife, Bonny, on Thursday. “The biggest one was when Mayor (Alan) Arakawa said we’re going to shut down the course last year.

“After that, we lost four good employees.”

Among the restaurant’s problems, the windows could not close, and the roof leaks, which caused flooding any time it rained, Davis said. She reported having electrical fires, water outages because of vandalism and homeless people urinating and defecating outside the restaurant.

Davis also complained of golfers drinking alcohol illegally in the parking lot, which took business away from her restaurant and jeopardized her liquor license.

Buenconsejo said that, according to the Maui County Code, drinking is allowed on the municipal course, but not in the parking lot. The department would “tighten up” and be “more vigilant” about making sure golfers drink on the course or in the restaurant, he said.

Some golfers expressed issues over the restaurant’s hours and food selection.

Ishikawa said its hours were inconsistent and did not cater to golfers. The restaurant declined to make plain cheeseburgers or a half-order of its french toast, he said.

“To me, it wasn’t golfer friendly,” he said. “That was the whole intent — for the restaurant to serve the golfers. Most restaurants say, ‘Oh, OK,’ and they give you a half-order.

“It got to the point where people said, ‘Ah, we’ll go someplace else.’ “

Davis said she opened at 6 a.m. for the first three years to accommodate golfers, but she was losing money. She said business boomed between 11 a.m. to 2 p.m., but died down from 3 to 5 p.m.

“It wasn’t worth it to open at 6 a.m.,” she said. “You’re lucky if you sell a cup of coffee. On weekends, you definitely do well, but weekdays it is truly truly not worth it.”

Davis said she met with county Finance Director Mark Walker and real property manager Guy Hironaka in September about terminating her lease early at the end of June this year. The county responded Monday in an email stating that the restaurant owners would need to leave by the end of the month.

“It was really quite a shock, and we felt we weren’t included in any talks or conversations,” Davis said.

After posting a long complaint on Facebook, Davis received a call from Walker the next day to apologize and notify her of the golf course’s partial closure. She said Walker told her it would benefit her to be able to close earlier due to the resulting loss of business.

Both sides agreed to terminate the contract April 8 to give the owners time to shut down. Davis said she hopes to eventually find a new location, while working out of her food truck at First and Fourth Friday events.

“We so appreciate Mark and Guy. They’re great guys,” she said. “They worked with us and reached out to us. He owned it and said sorry for the lack of communication and we appreciate it.”

Buenconsejo did not have a timeline for when a vendor would replace Fatt Chicks Burgers, saying it would depend on the costs of building repairs. He said that once the department knows the cost, it would decide whether to go through with minor repairs or possibly rebuild the restaurant along with the clubhouse.

In the meantime, the department is looking at contracting a couple of food truck operators to serve golfers.